– Why Should Your Child Learn a Foreign Language? 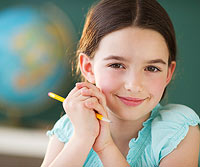 A growing number of parents are enrolling their babies, toddlers, and preschoolers in foreign-language classes — and the numbers are expected to rise. “The popularity of such shows as Dora the Explorer, which teaches Spanish, and Ni Hao Kai-lan, which teaches Mandarin Chinese, suggests that parents want to be more proactive in jump-starting foreign language education for their children,” says Yani A. Peyton, a bilingual mother of twins and the director of Fun with Foreign Language (funwithforeignlanguage.com) in Bel Air, MD. This should come as no surprise, since numerous studies show that speaking a second language boosts cognitive, memory, and listening skills.